The wood used in the manufacture of percussion instruments varies according to the area of origin; In Latin America, the variety of trees is enormous, in North America the maple is the most sought after and in Europe beech and birch have always been used to build percussions in general. Fortunately, birch has the right characteristics for the cajon, since it offers a very sharp and clear sound. And just like drum kits, plywood is often used to make cajons.

Most of DG cajons are made of birch. The different parts are combined with ultra-resistant vinyl glues, and varnished with a double layer of polyurethane product.

The concept of the Reduced Tapa Size (RTS) comes as a natural development of the patented DG cajon, and consists essentially of making each beating surface of the cajon slightly smaller than the body of the instrument itself. The majority of cajons in the market have a front plate built to exact measure of the cajon, milled, sanded and varnished onto the body of the instrument, which makes it impossible to replace it in case of damage, without having to re-sanding and varnishing again all the cajon completely.

This complete fusion between the two parts can become a problem over time, because the two things have different life spans, being that of the beating surface much shorter, because it is thinner, and the one that is hit.

For this reason we proposed to allow the end user the possibility of changing the front plate, as well as how a drummer can change the heads of his drums.

The subject has a classification question in the background: does the cajón belong to the idiophone category, like wood blocks, or rather to that of a membranophone, such as congas? 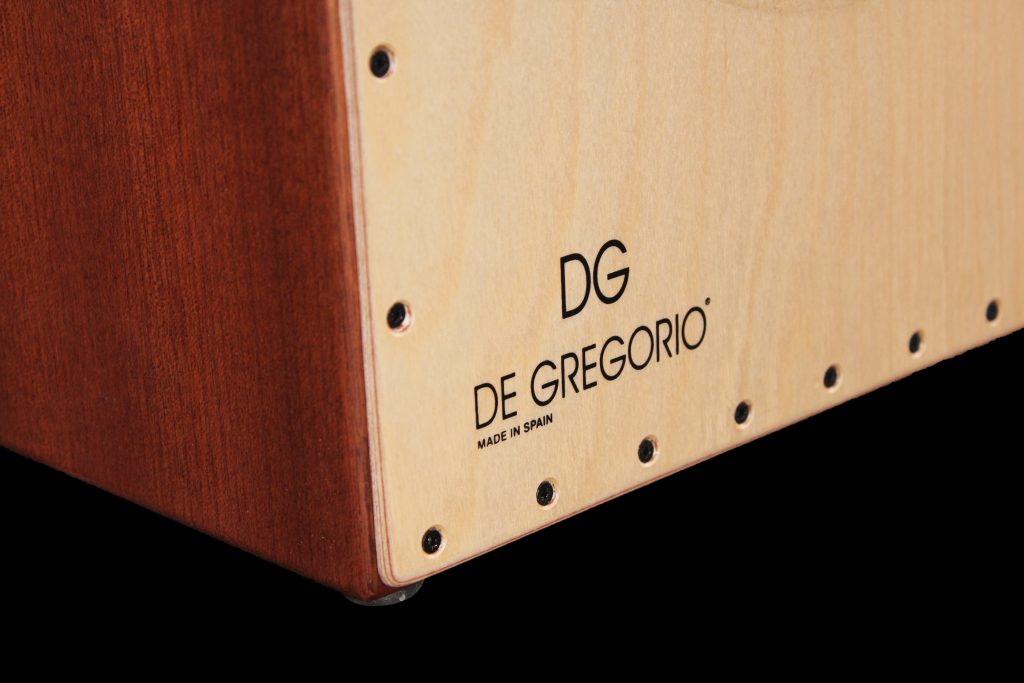 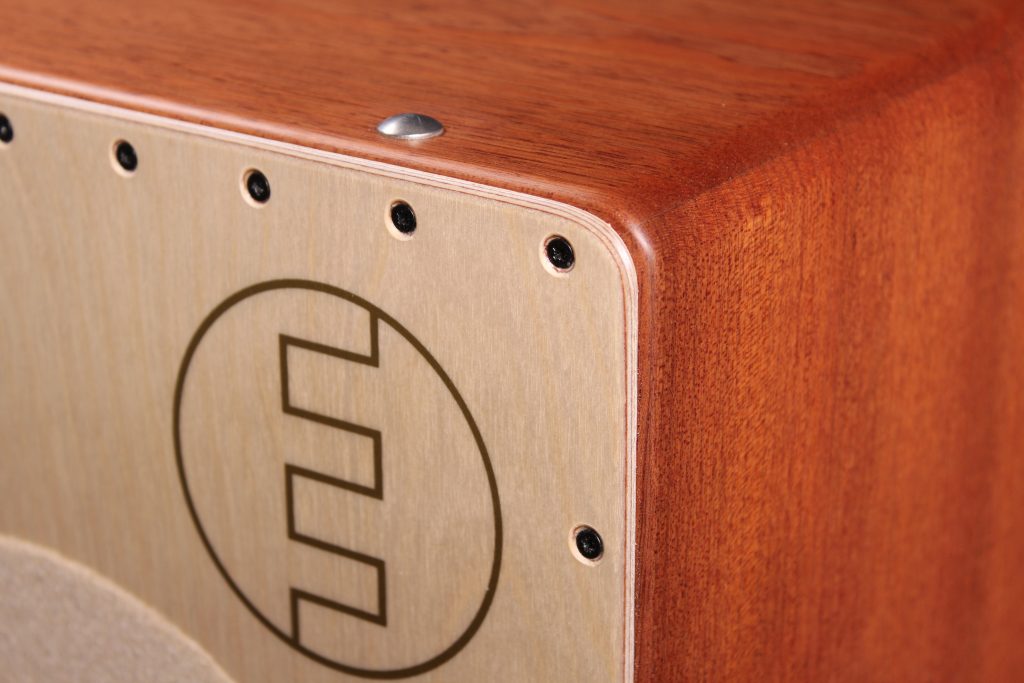 The second one seems more appropriate to us, and that is why we manufacture all our front plates after cutting them with CNC machinery, so that they are all perfectly equal and interchangeable.

Therefore the holes on the body of the cajon correspond exactly to all the front plates.

The perimeter of the lid is rounded, and is coupled to the edge, also rounded, of the body of the cajon, leaving a “soft jump” between the two surfaces, practically non detectable to the eye and touch.

This way it is possible to replace a lid, without having to go through an artisan workshop.

A practical solution, which in addition to considerably lengthen the life of the instrument, allows to change one type of material for another, use different finishes, in short, to have more options. 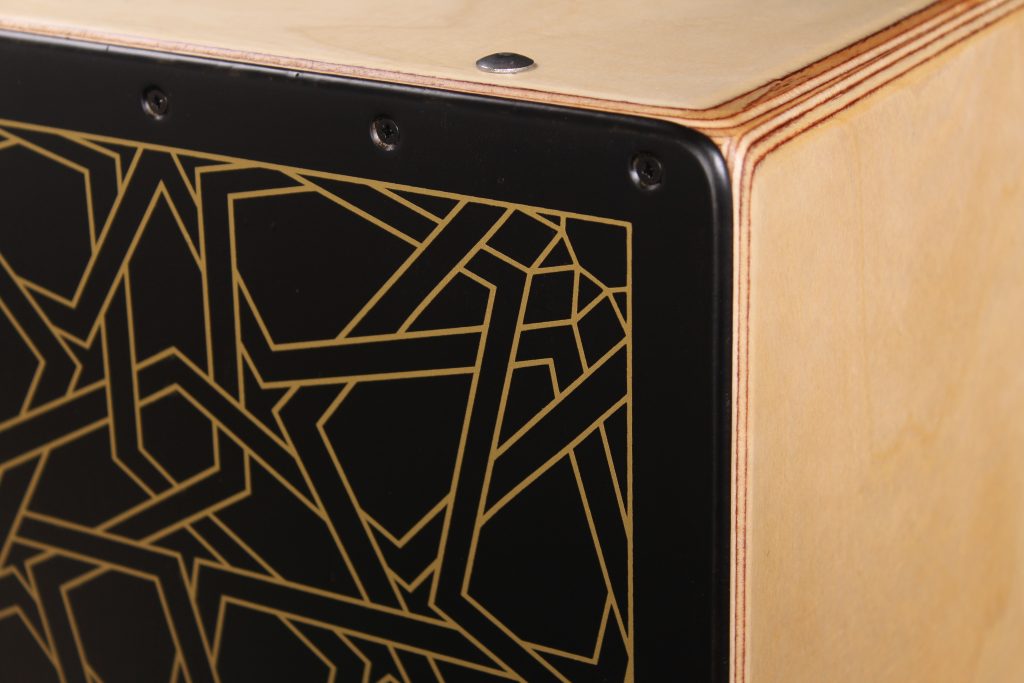 The Removable Snare System (RSS in English), is another original feature of the DG models, developed from the patented model Zambo, in which the snare was removable from the body of the cajon.

From the beginning of our activity it seemed to us that the possibility of removing the strings without having to remove the whole front plate was a fundamental quality, in order to keep the sound of the instrument with its original spark.

Each stroke in the drawer is a blow to the snare, which in the majority of cases are made up of guitar strings.

The break is a more than likely, event, something that can happen, of course, also depending on the use made of the instrument. 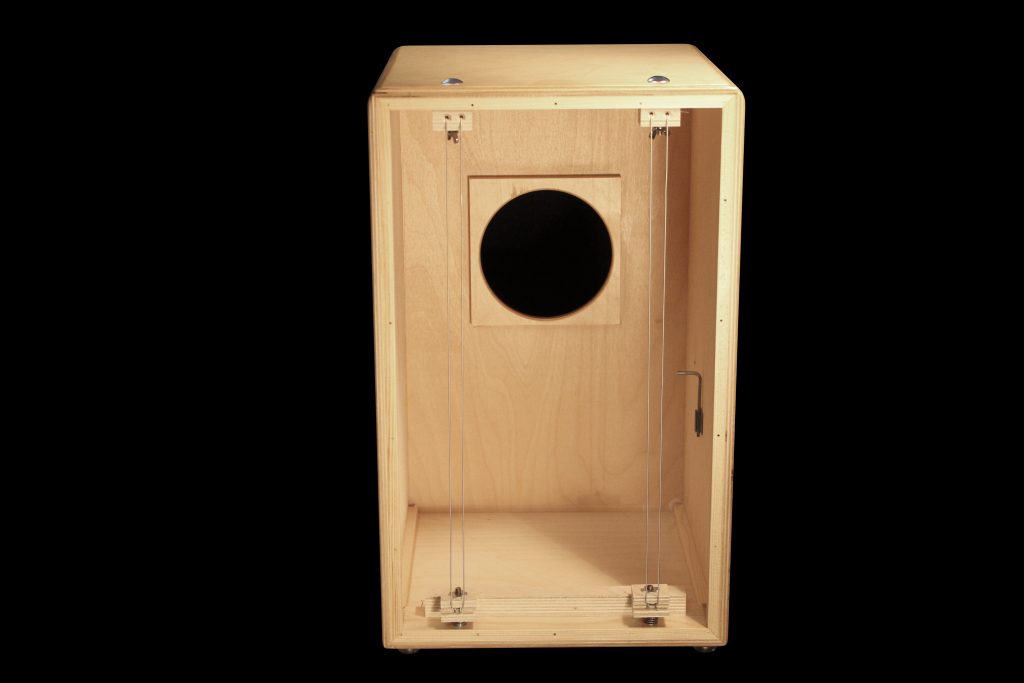 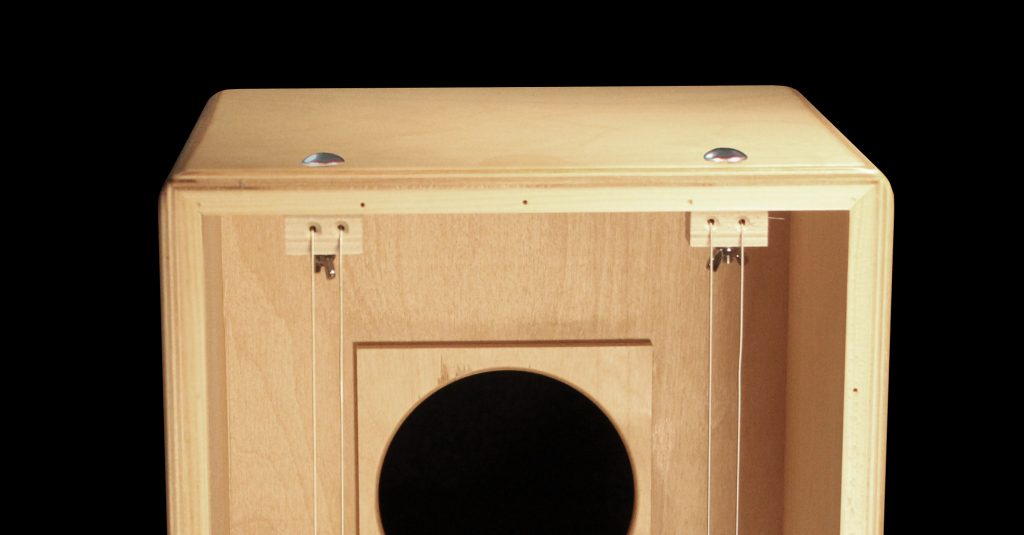 The more intensive, the greater the chance of breaking.

There are alternatives to guitar strings, such as snares used in snare drums or very thin springs, but the sharp effect is not as powerful, nor the effectiveness and precision in the application of tension, roughly speaking, “tuning” .

Our system allows the replacement of the strings in a few minutes, and without having to dismount the cajon.

The strings are mounted on wooden blocks, one is fixed at the top of the cajon, visible externally but bolted internally by means of a wing nut, while the other block is located at the bottom, with the function of tensioner.

The tensioner is adjusted with an Allen key through a screw, whose head is on the lower external side. 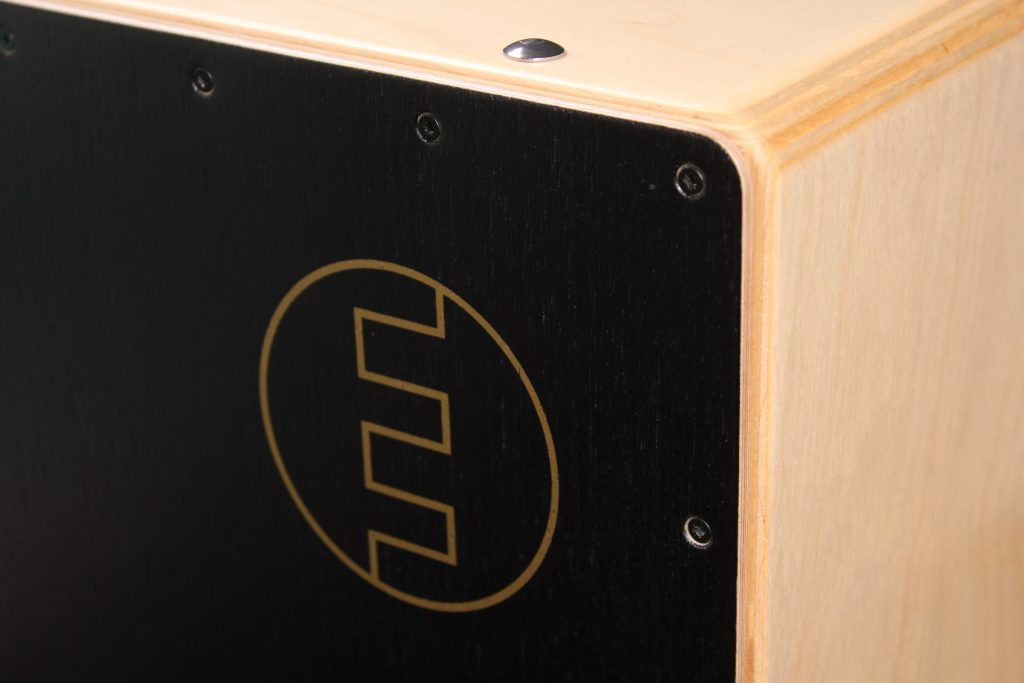 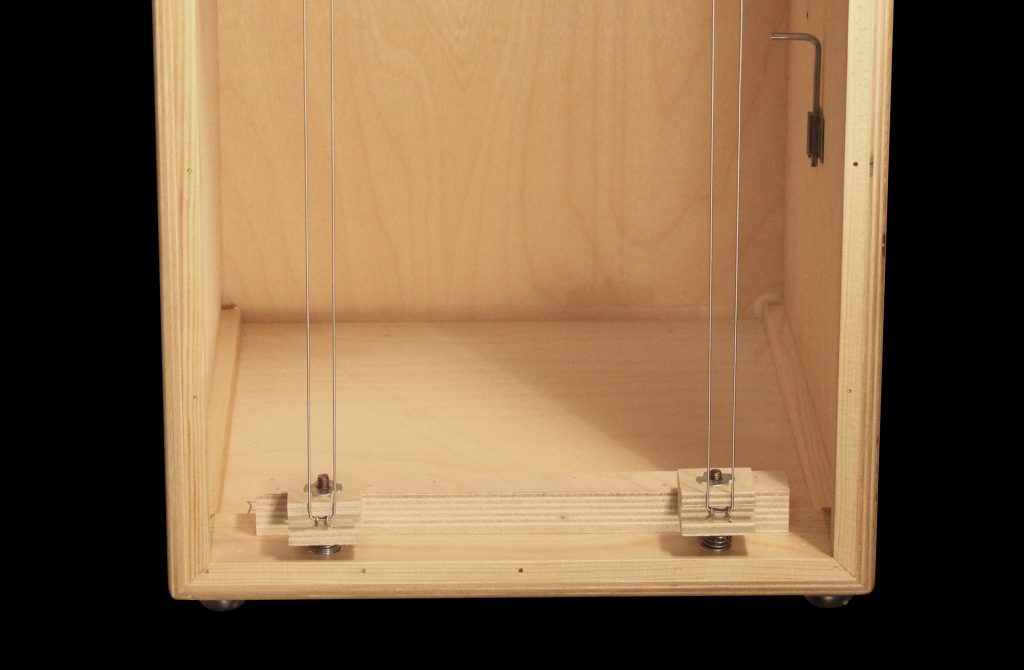 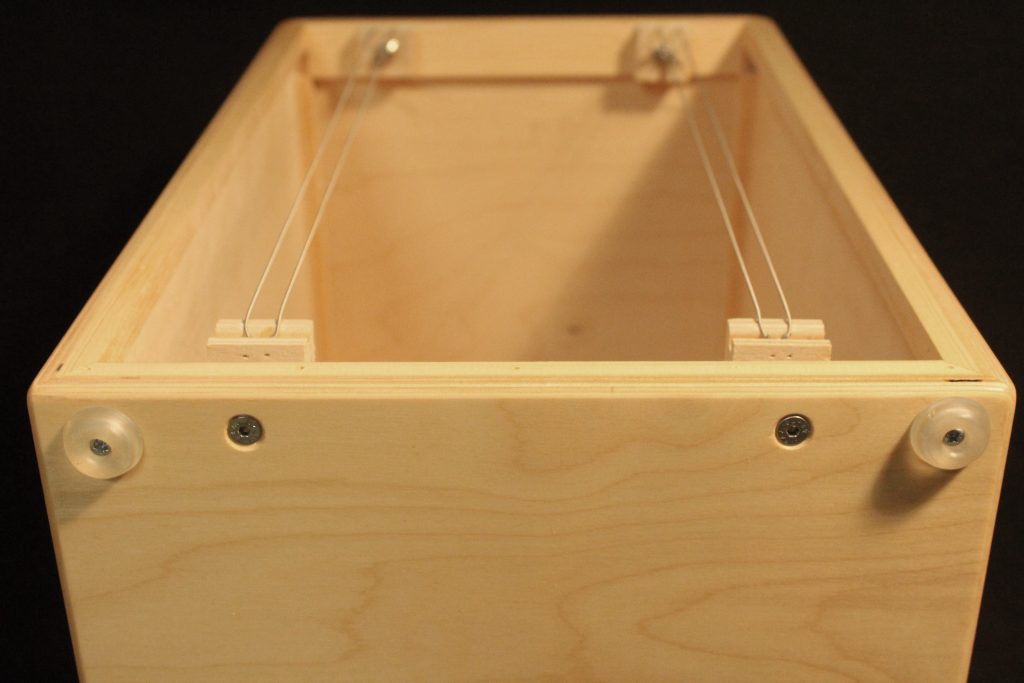 To remove the blocks then, you only need to unscrew the inner wing nut from the top, and unscrew completely from the bottom.